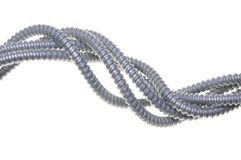 1. All-or-nothing thinking - You see things in black-or-white categories. If a situation falls short of perfect, you see it as a total failure. When a young woman on a diet ate a spoonful of ice cream, she told herself, "I've blown my diet completely." This thought upset her so much that she gobbled down an entire quart of ice cream.

2. Overgeneralization - You see a single negative event, such as a romantic rejection or a career reversal, as a never-ending pattern of defeat by using words such as "always" or "never" when you think about it. A depressed salesman became terribly upset when he noticed bird dung on the window of his car. He told himself, "Just my luck! Birds are always crapping on my car!"

3. Mental Filter - You pick out a single negative detail and dwell on it exclusively, so that your vision of reality becomes darkened, like the drop of ink that discolors a beaker of water. Example: You receive many positive comments about your presentation to a group of associates at work, but one of them says something mildly critical. You obsess about his reaction for days and ignore all the positive feedback.

5. Jumping to conclusions - You interpret things negatively when there are no facts to support your conclusion.

Mind Reading: Without checking it out, you arbitrarily conclude that someone is reacting negatively to you.

8. "Should" statements - You tell yourself that things should be the way you hoped or expected them to be. After playing a difficult piece on the piano, a gifted pianist told herself, "I shouldn't have made so many mistakes." This made her feel so disgusted that she quit practicing for several days. "Musts," "oughts" and "have tos" are similar offenders.

Many people try to motivate themselves with shoulds and shouldn'ts, as if they were delinquents who had to be punished before they could be expected to do anything. "I shouldn't eat that doughnut." This usually doesn't work because all these shoulds and musts make you feel rebellious and you get the urge to do just the opposite. Dr. Albert Ellis has called this " must erbation." I call it the "shouldy" approach to life.

9. Labeling - Labeling is an extreme form of all-or-nothing thinking. Instead of saying "I made a mistake," you attach a negative label to yourself: "I'm a loser." You might also label yourself "a fool" or "a failure" or "a jerk." Labeling is quite irrational because you are not the same as what you do. Human beings exist, but "fools," "losers" and "jerks" do not. These labels are just useless abstractions that lead to anger, anxiety, frustration and low self-esteem.

You may also label others. When someone does something that rubs you the wrong way, you may tell yourself: "He's an S.O.B." Then you feel that the problem is with that person's "character" or "essence" instead of with their thinking or behavior. You see them as totally bad. This makes you feel hostile and hopeless about improving things and leaves very little room for constructive communication.

10. Personalization and Blame - Personalization comes when you hold yourself personally responsible for an event that isn't entirely under your control. When a woman received a note that her child was having difficulty in school, she told herself, "This shows what a bad mother I am," instead of trying to pinpoint the cause of the problem so that she could be helpful to her child. When another woman's husband beat her, she told herself, "If only I was better in bed, he wouldn't beat me." Personalization leads to guilt, shame and feelings of inadequacy.

Some people do the opposite. They blame other people or their circumstances for their problems, and they overlook ways they might be contributing to the problem: "The reason my marriage is so lousy is because my spouse is totally unreasonable." Blame usually doesn't work very well because other people will resent being scapegoated and they will just toss the blame right back in your lap. It's like the game of hot potato--no one wants to get stuck with it.

Ten Ways to Untwist Your Thinking

1. Identify The Distortion: Write down your negative thoughts so you can see which of the ten cognitive distortions you're involved in. This will make it easier to think about the problem in a more positive and realistic way.

2. Examine The Evidence: Instead of assuming that your negative thought is true, examine the actual evidence for it. For example, if you feel that you never do anything right, you could list several things you have done successfully.

3. The Double-Standard Method: Instead of putting yourself down in a harsh, condemning way, talk to yourself in the same compassionate way you would talk to a friend with a similar problem.

4. The Experimental Technique: Do an experiment to test the validity of your negative thought. For example, if during an episode of panic, you become terrified that you're about to die of a heart attack, you could jog or run up and down several flights of stairs. This will prove that your heart is healthy and strong.

5. Thinking In Shades Of Grey: Although this method may sound drab, the effects can be illuminating. Instead of thinking about your problems in all-or-nothing extremes, evaluate things on a scale of 0 to 100. When things don't work out as well as you hoped, think about the experience as a partial success rather than a complete failure. See what you can learn from the situation.

6. The Survey Method: Ask people questions to find out if your thoughts and attitudes are realistic. For example, if you feel that public speaking anxiety is abnormal and shameful, ask several friends if they ever felt nervous before they gave a talk.

8. The Semantic Method: Simply substitute language that is less colorful and emotionally loaded. This method is helpful for 'should statements.' Instead of telling yourself, "I shouldn't have made that mistake," you can say, "It would be better if I hadn't made that mistake."

9. Re-attribution: Instead of automatically assuming that you are "bad" and blaming yourself entirely for a problem, think about the many factors that may have contributed to it. Focus on solving the problem instead of using up all your energy blaming yourself and feeling guilty.

10. Cost-Benefit Analysis: List the advantages and disadvantages of a feeling (like getting angry when your plane is late), a negative thought (like "No matter how hard I try, I always screw up"), or a behavior pattern (like overeating and lying around in bed when you're depressed). You can also use the cost benefit analysis to modify a self-defeating belief such as, "I must always try to be perfect."

Being blamed for his shortcomings was the worst. Amazing lack of self confidence these men have or women if they are the aggressors.

Signs To Look For In An Abusive Personality How to Identify a Psychopathic Bond How To Be A Passive-Aggressive Verbal Abuser Psychopathic VS Narcissistic Personality Covert Incest Protecting Yourself and Escaping from Abuse Psychological Abuse in Intimate Relationships Incr... Working Towards Emotional Healing: Dealing with Shame A Passive Aggressive Husband Shields Himself From ... Victims: How to File a Complaint about a DV "Servi...