A Passive Aggressive Husband Shields Himself From Intimacy 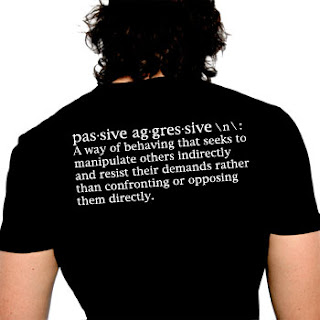 Living with a passive aggressive husband is a very disconcerting experience. You are fighting against shadows, and it is possible that it takes you a long time to realize the real nature of the relationship. By "fighting against shadows," we want to convey the meaning that you never have a concrete, real, and constant obstacle.

As it is based in an emotional resistance to intimacy, then you get all the gamut of denial, evasion, silence, and all the ways of "not really being here with you" he can muster. This style of communication is usually perceived by the victim as in this case: "My husband never says my name; he fails to acknowledge my presence, does not give me any compliments ever or volunteer help or information. He rarely asks me a question of any kind, or God forbid, inquire about my wants, needs, feelings, etc."

The wife's experience is one of emotional abandonment, including rejection of any intimacy. His safest moves are usually connected with the basics of shared life: food, household items, the weather, car issues.

What is missing here? the very heart of marriage, which is a level of openness and intimacy: the ability to connect with intangibles such as feelings and perceptions and dreams. "He has cut almost all connections between us and fails to participate in our marriage relationship. He never drinks, smokes, yells or hits me, but I'd prefer that he do, so I can know what is inside him...."

WHAT IS PASSIVE AGGRESSION?

Passive aggression is caused by a person's learned and deep fear of expressing his/her anger directly to whoever (in this case his spouse) is aggravating them, having to resort to covert abuse to express their frustration and anger. The passive aggressive person is a master at covert abuse. Covert abuse is subtle, and veiled or disguised by actions that appear to be accidental.

A passive aggressive personality involves a set of "resistance" behaviors-from innocuously dropping things or seeming to forget tasks, to open task procrastination. It can escalate to all-out sabotage-in which case we recognize that there is a passive aggressor's intention to get back at his partner without that person being able to recognize his underlying anger, or doing something to resolve it.


Passive aggressive people have an ax to grind concerning past situations where their right to anger was not allowed to surface. Probably in their family of origin there were threats of abandonment or any other punishment preventing them from being honest with their feelings, and thus they never learned how to be able to express them in the most appropriate way. Now, as adults, their aim is to resist work, couple and other social demands, because they identify them as coming from the hated enemy of their past: such as parents and authority figures.

This unsolved anger business, a leftover from their past, is being re-enacted now on a daily basis against unsuspecting partners: bosses, spouses, parents, teachers, or anyone who has power or authority.

PA husbands take genuine pleasure here and now in frustrating their spouse, seen as "stand in" or replacement for the authority figures of their past. Any spouse can stand in the role of the absent parent, master or teacher, unknowingly "invited" to participate in this game while thinking that they are instead in a cooperative partnership among equals. A passive aggressive husband can drive his wife into a crazy and confused state, but he seems sincerely dismayed when confronted with his behavior.

Due to their own lack of insight into their feelings the passive aggressive person often feels that other people misunderstands them or are holding them to unreasonable standards when confronting him about his behavior.

You will need to accept the loneliness of the single parent having to raise a family with scant support and no companionship and hope for the best. This acceptance has to be temporary or you run a very real risk: being in a long time marriage sustained by an unconscious deal: she fears loneliness, so she stays, and he can be who he is for ever, denying the time passage and the fact that people (eventually) mature with age.

The PA husband is battling the wrong war: he is defending himself here and now against the perceived intrusion of his father/mother in his inner selfhood and does not see you, his partner, as a different person in a different, cooperative relationship;

Interesting read.
Consider the situation of the husband who becomes the P-A husband late in the marriage. He becomes fatigued at being the only initiator of sexual relations. He has stopped trying to determine what it is that is missing in his marriage that will help his wife to more frequently desire sex. He considers the role of being the sexually denied spouse beneath his dignity over time, painful emotionally, and no longer is he willing to wear this role. He decides that his partner needs to experience his world. He becomes the P-A husband who withholds sex. He trades being the victim for becoming the victim-izer. Months turn into a year, then 4 years pass. What was initially too painful for him to bear, becomes easier. He discovers P-A coping techniques which significantly dampen his sexual urges: refusing to look in her direction when she is naked, avoiding TV shows and movies that display nudity or sexual contact, avoiding situations that lead to physical contact, reduction of eye to eye contact, aggressive daily workouts to exhaustion, an alcohol drink before bed, reading until late at night. Eventually, he discovers that he really could care less if he never has sex with his wife again. He has become a spousal roommate. He has discovered he has control over perhaps the most powerful physical drive in Nature: the drive to procreate. Meanwhile, his wife is left wondering what is wrong with her husband or what she has done to deserve such a marriage. Because there is no confrontation, she is left to learn the pain that he has experienced over the 1st 20 years of their marriage, without ever knowing that she is where she is today for having participated in causing that pain.
The P-A husband who has taken over his own destiny (in this destructive fashion) spends his time wondering (when he thinks about it all) just how long she will hold on before she snaps. He has found other mechanisms for dealing with his physical desires. What started out as an experiment with P-A communication regarding a deeply flawed partnership, has created an even more deeply flawed partnership. Over time the partnership itself has died a slow and terrible death.
What outlet will his wife choose? How long before she looks outside the marriage? He doesn't really care.
Cruel? Yes. More cruel then the pre-ceeding 20 years? Only he is permitted to decide, since only he has lived it.
Why are there so few men available for re-marriage in the 40-65 yr age group? Many are, and never were suitable for marriage. They are incapable of sustaining a relationship for any meaningful period of time. They simply cannot provide for themselves nor a spouse. They are easy to spot, if you know what to look for and you aren't in a hurry.
Many others fall into the situation of the male that I described above. They have participated in a marriage of equals, have fathered and reared children. They appear normal. But, they are damaged. You will find them participating in extreme sports, even into their 60's. They run marathons, compete in tri-athalons, but there are no females in their lives. They associate freely with women, but are not intimate. They seem upbeat. They fill their lives to over-flowing with activities. They tend not to retire from the working-world. They fill their time aggressively and push their bodies to the limit in order to feel....something, anything. In short, they look like a catch. They are fit, economicall sound and seemingly virile. But these guys are unavailable. They do not respond to the typical male-female signals that are traded in the singles market. They give none of the body signals that a woman can expect from a hetero-sexual man that is currently unattached to a female. Women may be inclined to think that these men are looking for a certain age female, hair color, bust size, or body type. All of these assumptions are wrong. These guys are not in the market.

These guys are me.

Victims: How to File a Complaint about a DV "Servi... Know Excuses Coping With Triggers 10 Commandments of Dysfunctional Families Emotional Boundaries in Relationships Psychopathic Bullying The Hoover Maneuver Dealing With Manipulative People Bill of Rights for Domestic Violence Victims Detaching from The Loser