When Bad People Do Good Things 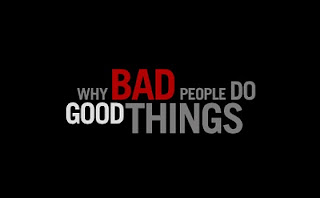 Even bad people can sometimes behave well. That seems a strange twist on the idea of “good people behaving badly.” But it’s true. Even the skeeviest personality isn’t usually spending all day long exploiting everyone who enters his path.

Now this doesn’t mitigate his skeeviness one wit. But it’s also true that sociopaths aren’t always exploiting and mistreating others, all day long. They will be taking some time off, in different contexts, from their more unseemly behaviors.

And so sometimes, sociopaths can be nice, even very nice; sometimes they may extend themselves to others. Now we can question what motivates them when they are behaving well; probably, very often, their prosocial behaviors are driven by relatively shallow, if not manipulatively self-serving, motives.

Still, it’s fair to say that most sociopaths aren’t spending their lives 24/7 causing havoc to everyone around them; and it’s fair to suggest that, sometimes, if motivated to do so, they may even bring some cheer into others’ lives.

But to avoid confusion, my point is this: Beware! Do not rule-out sociopathy, or a similarly exploitative personality disturbance, simply because the individual is capable of behaving well sometimes, or even, alas, often.

To do so risks our missing the significance of the dangerous, always lurking curve-balls that the even sometimes well-behaved sociopath may throw at any time (predictably or not).

So while I’m not necessarily saying “don’t be fooled” by his better behaviors, which may (or may not) have a genuine component to them, I am suggesting the exercising of great caution not to let the sociopath’s better behaviors distract you one bit from giving full weight to, and appreciation of, his destructive behaviors.

The latter should not be regarded as one bit less menacing and forbidding by virtue of his capacity to display the former.

(This article is copyrighted © 2010 by Steve Becker, LCSW. Use of male gender pronouns is strictly for convenience’s sake and not to suggest that females aren’t capable of the behaviors and attitudes displayed.)

This is a fantastic article, thank you!

How many times I have wondered,
"Why spend all that time and money, to appear kind, and then do the other despicable things?"

For a sum total of ZERO.

I like your interpretation of this article...opened my eyes a little wider. total zero!!!

THE PSYCHOPATH'S (or NARCISSIST'S) PRAYER "Get Anyone to Do Anything and Never Feel Powerles... Power Patterns REVICTIMIZATION When Others Believe Your Abuser Pathological Lying Liar! Liar! When Your Perfect Partner Goes Perfectly Wrong Should I End This Relationship? Do Narcissists KNOW?