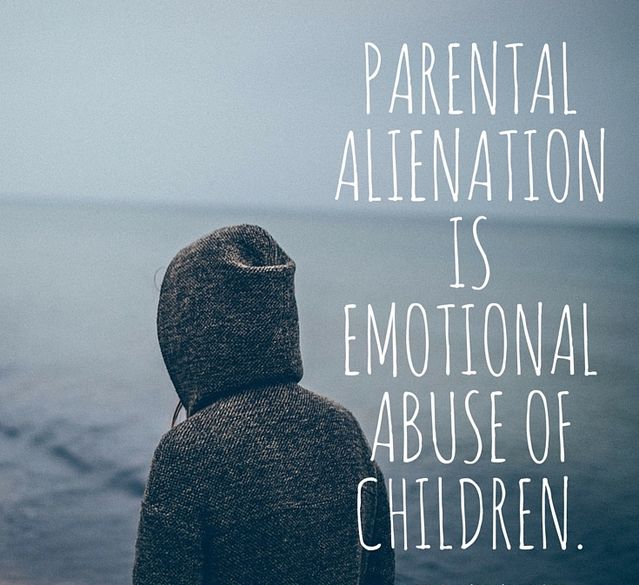 Parental alienation varies in the degree of severity, as seen in the behaviors and attitudes of both the parents and the children. The severity can be of such little consequence as a parent occasionally calling the other parent a derogatory name; or it could be as overwhelming as the parent's campaign of consciously destroying the children's relationship with the other parent. Most children are able to brush off a parent's off hand comment about the other parent that is made in frustration. On the other hand, children may not be able to resist a parent's persistent campaign of hatred and alienation.

To prevent the devastating effects of Parental Alienation, you must begin by recognizing the symptoms of Parental Alienation. After reading the list, don't get discouraged when you notice that some of your own behaviors have been alienating. This is normal in even the best of parents. Instead, let the list help sensitize you to how you are behaving and what you are saying to your children.

1. Giving children choices when they have no choice about visits. Allowing the child to decide for themselves to visit, because when the court order says there is no choice sets up the child for conflict. The child will usually blame the non-residential parent for not being able to decide to choose whether or not to visit. The parent is now victimized regardless of what happens; not being able to see his children or if he or she sees them, the children are angry.

2. Telling the child "everything" about the marital relationship or reasons for the divorce is alienating. The parent usually argues that they are "just wanting to be honest" with their children. This practice is destructive and painful for the child. The alienating parent's motive is for the child to think less of the other parent.

3. Refusing to acknowledge that children have property and may want to transport their possessions between residences.

4. Resisting or refusing to cooperate by not allowing the other parent access to school or medical records and schedules of extracurricular activities.

5. A parent blaming the other parent for financial problems, breaking up the family, changes in lifestyle, or having a girlfriend/boyfriend, etc.

6. Refusing to be flexible with the visitation schedule in order to respond to the child's needs. The alienating parent may also schedule the children in so many activities that the other parent is never given the time to visit. Of course, when the targeted parent protests, they are described as not caring and selfish.

7. Assuming that if a parent had been physically abusive with the other parent, it follows that the parent will assault the child. This assumption is not always true.

8. Asking the child to choose one parent over another parent causes the child considerable distress. Typically, they do not want to reject a parent, but instead want to avoid the issue. The child, not the parent, should initiate any suggestion for change of residence.

9. Children will become angry with a parent. This is normal, particularly if the parent disciplines or has to say "no". If for any reason the anger is not allowed to heal, you can suspect parental alienation. Trust your own experience as a parent. Children will forgive and want to be forgiven if given a chance. Be very suspicious when the child calmly says they can not remember any happy times with you or they cannot say anything they like about you.

10. Be suspicious when a parent or stepparent raises the question about changing the child's name or suggests an adoption.

11. When children can not give reasons for being angry towards a parent or their reasons are very vague without any details.

12. A parent having secrets, special signals, a private rendezvous, or words with special meanings are very destructive and reinforce an on-going alienation.

13. When a parent uses a child to spy or covertly gather information for the parent's own use, the child receives a damaging message that demeans the victimized parent.

14. Parents setting up temptations that interfere with the child's visitation.

15. A parent suggesting or reacting with hurt or sadness to their child having a good time with the other parent will cause the child to withdraw and not communicate. They will frequently feel guilty or conflicted not knowing that it's "okay" to have fun with their other parent.

16. The parent asking the child about his or her other parent's personal life causes the child considerable tension and conflict. Children who are not alienated want to be loyal to both parents.

17. When parents physically or psychologically rescue the children when there is no threat to their safety. This practice reinforces in the child's mind the illusion of threat or danger, thereby reinforcing alienation.

18. Making demands on the other parent that is contrary to court orders.

19. Listening in on the children's phone conversation they are having with the other parent.

20. One way to cause your own alienation is making a habit of breaking promises to your children. In time, your ex-spouse will get tired of having to make excuses for you.

Thank you for the support gathered here! One-way I am facilitating my own recovery is by writing a petition. Although the petition is not perfect and, indeed, may not make a difference, it is an attempt that is helpful to my process. I am asking you to go to http://www.thepetitionsite.com/9/child-abuse-is-wrong and sign for me. If you feel comfortable signing, who knows, this may make a difference to my children. Thank you for taking time to read this!

I need a great therapist, that specializes in PAS . I live in CT. I need the proper support for my children. Please help. If you know of someone or someone that can help me.. God Bless.Dinamankie@yahoo.com

I am a survivor of many forms of child abuse, including severe parental alienation by my mother. A child will say, "I am half this or part that," in reference to their roots. But a child also feels that they are half their mother and half their father. They have heard, throughout their lives, that they have their mom's eyes or their dad's hands, etc. So parental alienation does not only attempt to destroy the loving bond between a parent and a child, but it also is an attack upon the child's sense of self. The child is left feeling that they have "bad parts" inside of them from the other parent, by the alienating parent. It attacks the child directly, hurting them to their core. Not many parents or courts realize this. If they did, I think parental alienation incidences would drop dramatically.
I have written a book of hope for survivors of child abuse and parental alienation, called Keeping Mother's Secrets. Profits go to Child Help to help abuse children and parents dealing with this issue. If anyone would like to contact me to discuss parental alienation, my email is keepingmotherssecrets@gmail.com

It's been 3 years since my son has been taken from me. I forget what he looks like.
I am feeling helpless.
PAS is destroying me

Abuser Breakdown Tactics WHAT IS EMPATHY? Anger isn't always bad - 5 ways that anger is GOOD! Beware Disordered Therapists, Gurus and Spiritual ... If He/ She REALLY Wants to Change Mistakes Victims Make Blogiversary for Sanctuary for the Abused Are You Involved With A Narcissistic Person? 10 Reasons Abusers Don't Change One Group Has a Higher Domestic Violence Rate Than...