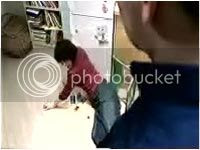 Battered Women Syndrome (or BWS) was first presented in the 1970's as a way to justify when a woman killed her husband because he abused her in some way. One reason why many judges are against pleading guilty by reason of BWS is because BWS hasn't been scientifically proven as a real syndrome. But if so many women kill after their husbands beat THEM half to death, why hasn't it been validated as a reasonable plea?

Some psychologists believe a more appropriate diagnosis for a woman who has been labeled as having BWS is Post-Traumatic Stress Disorder(PTSD) (*see http://www.psychologyandlaw.com/battered.htm ).

Therefore, BWS should be a subcategory of PTSD.

A battered woman is labeled a "battered woman" when she experiences 3 cycles of being battered. The cycle is:

. Honeymoon Phase - The abusers kiss and make up part, everything is wonderful, he will never do it again...but 8 times out of 10, he does do it again.


According to http://www.divorcenet.com/, there are 4 characteristics of this syndrome:

1. The woman believes that the violence was her fault.

2. The woman has an inability to place the responsibility for the violence elsewhere.

3. The woman fears for her life and/or her children's lives.

4. The woman has an irrational belief that the abuser is omnipresent (Present everywhere simultaneously) and omniscient (Having total knowledge; knowing everything).

In research for this article, I read that many judges will question why a woman stays in a relationship where there is abuse to the point of her wanting to kill her spouse/boyfriend. This is one of the most frustrating questions someone in s domestic violence relationship gets all the time. Sure someone who hasn't ever been in the situation can say "I will never let a man abuse me". It is easier said than done. Every person who has gone through spousal abuse has a different reason(s) for staying as long as they do and often times we are looked down upon for staying!

Most women who have killed their abusers felt like they had no other way out but to commit murder. They have been driven to the breaking point usually after years of abuse. Now I am not saying what they did was right by any means. There are other ways to deal with abuse and to get out, but these women feel like there is absolutely no way out. A lot of courts that hear cases of murder committed by a woman who claims abuse usually end up with lawyers and judges who want proof of the abuse. Many times abuse can't be proven because a woman takes it and doesn't report it to the police or the hospital staff if they ever have to go there.

In conclusion, I believe psychologist and doctors need to do more research into this syndrome. I personally do believe that someone can commit murder after years of abuse, but there will always be people who use this as an excuse.