Should I End This Relationship? 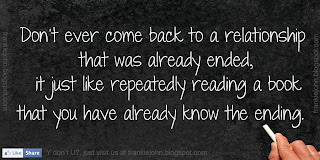 In the 35 years I’ve been counseling, thousands of couples have come to me wondering if they should end their relationship. Most of these people were in love at one point but are now really miserable with each other, or one partner is miserable with the other. Generally, they don’t know what the real problem is. They know what they don’t like about the other person. They know they can’t communicate about what is important to them. They know they fight about money or sex or time or chores or hundreds of other things, or they ignore the problems and are distant. What they don’t know is what the REAL problem is.

Leaving a relationship before knowing what the real problem is, is generally a waste of time (aside from domestic violence) - especially if you eventually want to be in another relationship.

The reason it’s a waste of time is because whatever you are doing to create your unhappiness, you are not going to stop doing just because you leave the relationship. You take yourself with you when you leave, and unless you heal your part of the relationship problem, you will continue to behave in ways that eventually destroys relationships.

You might be surprised to learn that the time to leave a relationship is NOT when you are miserable, but rather when you are happy, joyful and peaceful. When you have learned how to make yourself happy and bring yourself peace and joy, and if your partner is still distance, angry, needy, disconnected, resistant, unloving, or acting out addictively - then it may be time to leave if that is what you want.

When I work with couples, I help each partner learn how to take full, 100% responsibility for their own feelings and needs. Obviously, if both people are behaving in ways that bring themselves joy, they will have a lot of love to share with each other. As long as they are stuck believing that their unhappiness of the other person’s fault, they are being victims. As victims they want to control the other person and get them to behave the way they want them the behave. As victims, they are afraid of being rejected or controlled, and are behaving in ways to protect themselves from what they fear. All the ways they are trying to have control over not being rejected or controlled are creating the relationship problems.

Until you become aware of how you are being a victim and how you are trying to control your partner - and you are successful in taking care of your own feelings and needs - there is no point in leaving.

• When Robert is demanding, Ingrid gives herself up to comply with Robert’s demands. The more Ingrid complies, the more Robert demands.

• When Jacob criticized, Hannah might speak up for herself instead of shutting down, saying something like, “Jacob, I don’t like being criticized. I’m not willing to have this discussion until we can be open with each other.” When Hannah shut down, Jacob could be curious instead of critical, saying something like, “Honey, you must have a good reason for withdrawing from me. Do you want to talk about it?”


• When Sally got angry, Joe could disengage from the conversation instead of trying to talk her out of her feelings. He would give up
trying to have control over Sally’s anger and how she sees him and take care of himself. When Joe tried to control Sally with his lecturing and explaining, instead of trying to control him with her anger, Sally could speak up for herself, telling Joe that she doesn’t like it when he tries to talk her out of her feelings.

There is no point in leaving a relationship until you have learned act in ways that are loving to yourself and your partner, instead of reacting in controlling and resistant ways. Leaving only delays this learning until your next relationship.

We must be VERY careful to not pretend we are with a normal human being if we are with one who has the brain functioning of a psychopath. Letting them know how you feel, what you think is nothing more to them then fuel that they then pour back onto your head so that they can light you on fire in a figurative (and sometimes literal) sense. Also, you will rarely be able to be at peace in the presence of these people as they are 100% evil and you will most likely only find peace once you are away from them. Psalm 55:21 "His speech is smooth as butter, yet war is in his heart; his words are more soothing than oil, yet they are drawn swords."


Per many other articles on this website about PTSD, MS, adrenal fatigue and other physical ailments caused by the stress of being in a realationship with one who has the brain functioning of a psychopath, you may need to prepare carefully and then RUN out of the relationship in order to achieve peace of mind and heart.

MRI's checking for psychopathy before any marriage counseling, marriage etc. should be an option that we all have access to.

very informative post for me as I am always looking for new content that can help me and my knowledge grow better.

Do Narcissists KNOW? A Nurturing Soul Does Not Compute with a Sociopath The Contradictory Nature of Narcissists Abusers Deny or Minimize the Abuse Unresolved Trauma What is "Abused Woman's Syndrome?" Dealing with an Affair "PARENTING" WITH A NARCISSIST, SOCIOPATH or ABUSER Relapses & Slips We Mistakenly Believe...