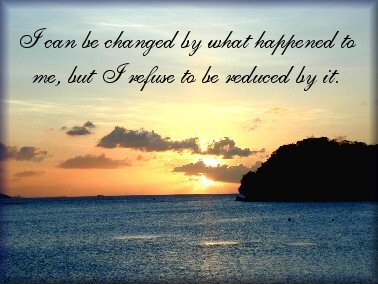 Thanks for posting my February 20th comment. Todays phrase you posted brings up an interesting memory of a comment my x-fiancee learned in law school. "everything before the word "but" is construed as a lie. Amazing what is taught where it concerns reality. Reality being an individual perception, what is real to us, is indeed real, good, bad, or indifferent. My perception of your comment today, "words to live by."

The abuse people endure is not gender specific, although most cases relate to men. I apologize in advance if I am off topic, however, your website was an opportunity for me to state that women are capable of abuse as well. All the signs are much the same, though cognitively and emotionally, I believe a woman can be even more relentless in their pursuits, to demean and deprecate someone.They are more in-tune to emotions by design than men. Therefore, this innate ability can serve well to more effectively direct personal attacks upon or about your family, friends, and the like.

To share another experience, I would first like to preface this experience with a mandate that was made upon me by my x-fiancee. She was contolling about her personal time(via controlling my business and/or personal time) and activities with others. I mentioned in my previous Feb. 2oth comments, that she held season tickets to the local pro football team. In this case, she asked me the week before, to confirm that I would be in town to attend this game. I confirmed that I would. The Saturday night before the game, we attended a formal catholic fund raiser. She was ellusive most of that night,independently wandering from one group of people to another. She got very drunk that evening. I had caught up with her in one group of approx. 10 people and she left me there within a couple of minutes. One gentleman, initiated a conversation with me about my motorcyle. He said, "So, I understand from your girlfriend, you own a Harley Davidson Motorcyle, what model do you have? My reply, "No, I have a Honda VTX1300 cruiser." Oh, said this gentleman, your girlfriend said you had a Harley." I covered for her by saying she doesn't know the difference. Truth be known, she does know the difference and Harley's are considered in the cycle world as the epitomy of cruiser style motorcycles. This gentleman asked a couple of other questions about the group conversation with my X, and he could see my embarassment. He then asked me quietly, "is she capable of ever telling the truth?" I never mentioned this to her, nor was it important to me at the time. Mention of this would only end up in an argument. Later, upon our arrival home, she was still somewhat hammered. I asked what we were bringing, food wise, to the football tailgate party the next day. She then asked, "what makes you believe you're going to the football game?, did you purchase an extra ticket? My friend Christine and I are going on my Tickets!!" I reiterated our previous conversation of last week and she stated that conversation never existed and I made "shit" up. Here we go again with rants and rhetoric! Her mandate was then in effect, "If I don't say, then you are not invited", quote unquote, verbatim! A few weeks later, near January 01 New Years game, I had been with my x-fiancee for the entire week before, and nothing was mentioned about being invited to attend this game with her. Personally, I liked football, however, those tickets were hers,and indeed, she could do what she wanted with them. It was never an area of contention or resent for me. I offered on several occasions to share the expense each season, and she basically ignored each of my offers. Anyhow, the Saturday evening before the game, she prepared a nice meal for us. Note,this was a rare thing for her to do. After dinner was done, she popped this question to me, "would you watch L--- (her 7 year old son at the time)while I attend the football game tomorrow?" Now keep in mind the mandate, "if I don't say, then you are not invited." Base upon this mandate and the timing, I presumed I was not invited and made other plans. Plans that were requested by my daughter to spend New Years day with her. I advised my fiancee of my plans with my daughter, and the hysterics began. My f'n daughter this, my f'n daughter that, you're daughter does't care about spending time with you, in fact, you're probably making that story up because you're mad that I will be having fun at the game and you're not a part of it!!" I was calm throughout her rant and it went on for about 30 minutes. She ended up getting a baby sitter for her son. I left and went back to my home. That Monday I received a call from her stating she had discussed this situation with her father and his take was,"he was surprised that I did not jump at the opportunity to futher bond with her son!! She never felt any remorse for the things she said about my daughter, she was steadfast in her convictons about me bonding with her son, and she felt she was not out of line in any way, shape or form. She justified her actions based upon her father's comments (I doubt she ever talked to her father?), therefore, and once again, I was the guilty party. Emotions are tools/weapons for the sociopathic personality. She had no mercy, no empathy, no remorse,and left me feeling castigated.

It is a known fact that Lawyers/litigators, male and female alike, have higher testosterone levels. This exacerbates agressive behavior, especially in a woman. I've always felt, yet never disclosed to my X-fiancee, that I viewed her as a "man with a vagina." There were some instances where she engaged me by "getting in my face" and would chest bump me, as if to provoke a physical altercation. That never happened of course. I will say this though,.. with all the anger and frustration that accompanied our relationship, the thought can cross your mind. I would not lower myself to such an egregious level. Like you say Barbara, "I refuse to be reduced by it."

There was one last conversation, a couple of days after I told her I was done with the relationship, that took me aside. It truly put a lot of things in perspective for me. It was her final attempt to convince me of the following idea:
She says, "I want you to name one couple you know, that is happy in their relationship..Nobody is the answer!! So what makes you believe we are any different." I did not even qualify her statement with an answer, I was saddened. Saddened in the sense, she was truly, emotionally detached and incapable of love. I then realized, for five + years, I was used for her own self serving needs. Thank god I had the where with all and courage to never marry her.

Once I rationalized this, the road to recovery has been less difficult than expected. I still find myself wondering though, how can a person be so void of love?! I know it's a self-serving need, and I cannot help but to think, if such a personality could only feel for once, the joy of intimacy, passion, to be sincere and complimentary, as opposed to adversarial. It's hard to fathom someone would prefer adversity over joy. We had many things in common where it concerned activities, hobbies, and the like. The temporary joy of these commonalities were outweighed by malicious overtures of her self-confidence, self-worth, a facade masking her indescretions and insecurities at the expense of my heart, mind and soul.

For those of you enduring an abusive mate, be it man or woman, take the stance where your dignity, and self-esteem are concerned. Understand, you are in a no-win situation with a sociopath or narsissistic personality. If you feel you have love to give, don't give it to those who will not, and cannot reciprocate. You live with self everyday, every hour, and every minute, so understand, it is not selfish to love yourself when such love in your heart can be given of free will to someone that deserves it. A sociopaths heart does nothing but pump blood, and a transfusion (professional intervention) would be the only way to cure them. Don't take the risks if there are signs, and if you are in an abusive situaton, muster the courage to leave and refuse to be reduced by it. You are worth saving.

After my experiences over the past five years, I feel obligated to share the psychological damage, the signs and experiences I have gone through. God knows, the animosity I have felt sometimes led me to believe these narsissitic personalites should exist on an Island to themselves! Wouldn't that be an interesting community to video tape for posterity sake! In any case, love your site Barbara, keep up the wonderful work. Bye for now.

Kathy Wilson
Thank-you for posting. I sit here 1 year after being bullied,scammed by my father,2 brothers, and 25 year boyfriend, of my dignity,lifes work,identity.
I am alone and scarred in ways I cannot articulate. However your posting comforted me. My N's want me to die to pick up all that I have left my
2010 Ford Truck,The Smear campaign has me alone,and hurting something fierce. But who demands your will be dispersed prior to your death.Then they wish you dead.

Why Do Abusive Men Abuse? How Can You Tell if You are Being Abused? Narcissism's One-Track Mind Manipulative People PTSD NO HELP to Victim of Domestic Violence from Pastor... The Lying Game Carrying A Torch... Getting Law Enforcement Authorities & the Police I... Why Women Stay