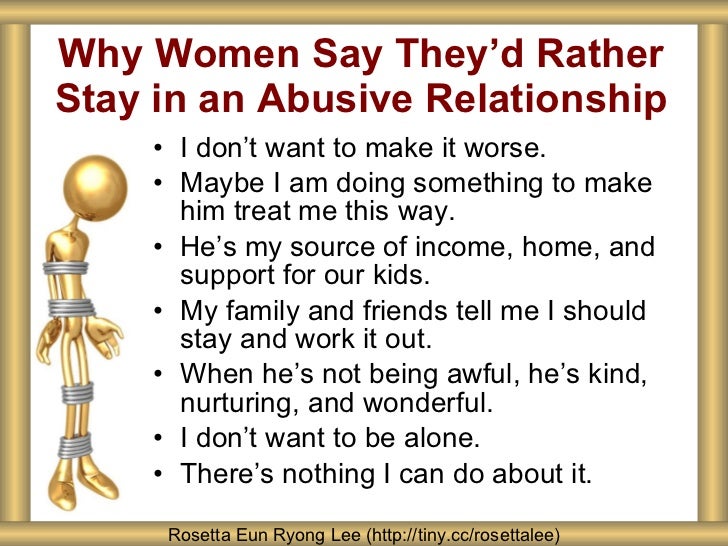 Situational Factors
Economic dependence. How can she support herself and the children? Fear of greater physical danger to herself and her children if they try to leave.

Fear of being hunted down and suffering a worse beating than before.

Survival. Fear that her partner will follow her and kill her if she leaves, often based on real threats by her partner.

Fear of emotional damage to the children.

Fear of losing custody of the children, often based on her partner's remarks.

Lack of alternative housing; she has nowhere else to go.

Lack of job skills; she might not be able to get a job.

Social isolation resulting in lack of support from family and friends.

Social isolation resulting in lack of information about her alternatives.

Fear of involvement in the court process; she may have had bad experiences before.

"Acceptable violence". The violence escalates slowly over time. Living with constant abuse numbs the victim so that she is unable to recognize that she is involved in a set pattern of abuse.

Ties to the community. The children would have to leave their school, she would have to leave all her friends and neighbors behind, etc. For some women, it would be like being in the Witness Protection program--she could never have any contact with her old life.

Ties to her home and belongings.

Family pressure; because Mom always said, "I told you it wouldn't work out." or "You made your bed, now you sleep in it."

Fear of her abuser doing something to get her (report her to welfare, call her workplace, etc.)

Unable to use current resources because of how they are provided (language problems, disability, homophobia, etc.) Time needed to plan and prepare to leave.

Emotional Factors
Insecurity about being alone, on her own; she's afraid she can't cope with home and children by herself.

Loyalty. "He's sick; if he had a broken leg or cancer--I would stay. This is no different."

Pity. He's worse off than she is; she feels sorry for him.

Wanting to help. "If I stay I can help him get better."

Fear that he will commit suicide if she leaves (often he's told her this).

Denial. "It's really not that bad. Other people have it worse."

Love. Often, the abuser is quite loving and lovable when he is not being abusive.

Love, especially during the "honeymoon" stage; she remembers what he used to be like.

Guilt. She believes--and her partner and the other significant others are quick to agree-- that their problems are her fault.

Shame and humiliation in front of the community. "I don't want anyone else to know."

Unfounded optimism that the abuser will change.

Unfounded optimism that things will get better, despite all evidence to the contrary.

Learned helplessness. trying every possible method to change something in our environment, but with no success, so that we eventually expect to fail. Feeling helpless is a logical response to constant resistance to our efforts. This can be seen with prisoners of war, people taken hostage, people living in poverty who cannot get work, etc.

False hope. "He's starting to do things I've been asking for." (counseling, anger management, things she sees as a chance of improvement.)

Guilt. She believes that the violence is caused through some inadequacy of her own (she is often told this); feels as though she deserves it for failing.

Responsibility. She feels as though she only needs to meet some set of vague expectations in order to earn the abuser's approval.

Insecurity over her potential independence and lack of emotional support.

Guilt about the failure of the marriage/relationship.

Demolished self-esteem. "I thought I was too (fat, stupid, ugly, whatever he's been calling her) to leave."

Lack of emotional support--she feels like she's doing this on her own, and it's just too much.

Simple exhaustion. She's just too tired and worn out from the abuse to leave.

Personal Beliefs
Parenting, needing a partner for the kids. "A crazy father is better than none at all."

Religious and extended family pressure to keep the family together no matter what.

Duty. "I swore to stay married till death do us part." Responsibility. It is up to her to work things out and save the relationship.

Belief in the American dream of growing up and living happily ever after.

Identity. Woman are raised to feel they need a partner--even an abusive one--in order to to be complete or accepted by society.

Belief that marriage is forever.

Belief that violence is the way all partners relate (often this woman has come from a violent childhood).