Attachment to the Perpetrator

The Problem of Attachment to the Perpetrator 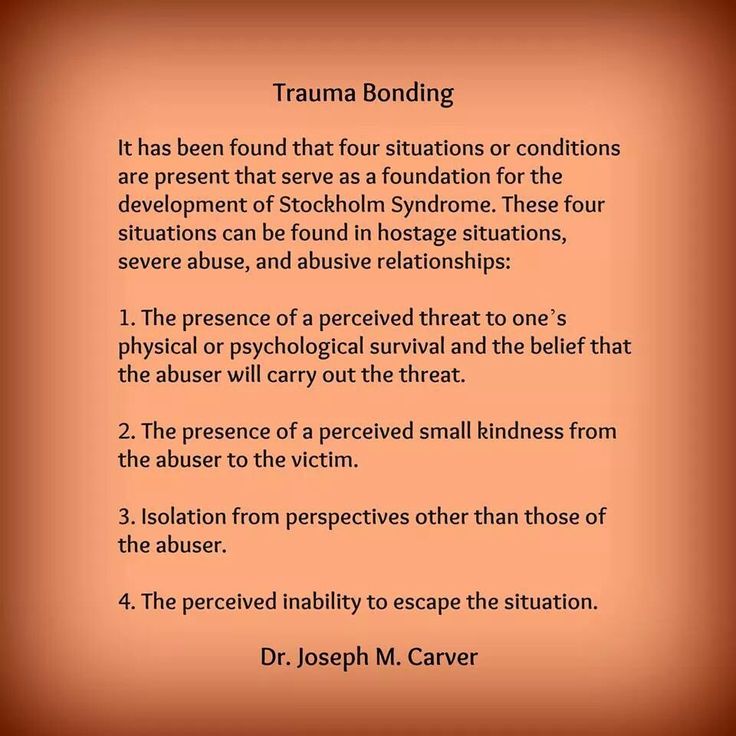 Over the last few years I have come to believe that a core problem in the psychotherapy of dissociative identity disorder is the problem of attachment to the perpetrator. This is also true for survivors of severe chronic childhood trauma who do not have D.I.D. The treatment that follows from this new model is different from the treatment of the ‘90s which focused more on memory recovery and abreaction. My sense of things is that the dissociative disorders field as a whole is shifting in this direction, away from “memory work” as such.

Memories are still a major element of therapy, and the trauma of the past is still talked about a lot. It’s a matter of a shift in emphasis rather than a change to a whole new way of providing therapy.

In the old model, which goes back to Pierre Janet in the nineteenth century, the idea was that the blocked memories were driving the symptoms – uncover the memory, process it and the symptoms go away. The key thing was to recover the information about what happened and all the feelings that go along with it. The old model was not wrong, it just wasn’t complete. For one thing, recovery involves learning a lot of new skills, not just abreacting trauma.

In this new model, the core problem is attachment, not dealing with memories and feelings as such. All baby birds and mammals must attach to a caregiver in order to survive. The attachment systems that control the behavior of mother and child (also father and child) are built-in genetically. The baby bird does not decide to chirp for food, and the mother bird does not decide to go out collecting food. All this just happens. The same is true for human children. A baby does not conduct rational adult analysis of human interaction patterns and then decide that crying has positive survival advantage. The baby just cries.

Similarly, the nursing mother who has a letdown reflex when her baby cries does not consciously decide to release more oxytocin from her brain in order to make her milk flow. Her body just does that for her. There are countless attachment behaviors that are built-in biologically. The parents also make conscious decisions about how to take care of the child for which they are responsible as adults. But the little child just attaches naturally in order to survive.

The basic goal is survival. Attachment serves that goal. This is true biologically, emotionally, humanly, spiritually, however one wants to look as it. To thrive and grow the child must attach to its caretakers. Separation and individuation from these caretakers is a task that is down the road developmentally, from the perspective of the newborn baby.

In a reasonable, healthy family this works out reasonably OK. The parents are imperfect and everybody has the usual neurotic conflicts about not having gotten all the love and nurturance that would have been ideal and perfect. We all have ambivalent attachment to our parents to some degree; we all are faced with the task of separation and individuation and none of us are complete successes.

In a family with active physical, sexual, or emotional abuse, however, things are different. The young child in this family – say it is a girl – must attach to her father for her survival. She cannot run away from home, get married, or go away to college because she hasn’t even gone to kindergarten yet. She depends on her parents for food, clothes, a roof, and her basic survival needs. She also needs her parents for her emotional and spiritual development. The problem is that the father she must attach to, in order to survive, is also the perpetrator who is abusing her.

Just as love, approach and attachment to parents are built-in biologically, so is the recall reflex. If you touch a hot stove by mistake, your brain pulls your hand away even before you consciously experience the pain. Your biology does this for you, without any conscious analysis or decision-making. Similarly, your body goes into recoil mode from child abuse automatically. You just automatically withdraw, pull back, and shut down.

One way to cope with the abuse would be to go catatonic. This would be developmental suicide. Except possibly in rare cases (which therapists never see in their offices) the body will not allow permanent catatonia – the attachment systems must be kept up and running for the organism to survive whether it is a child, a kitten, a bird, or a rabbit. There must be an override of the withdrawal reflex.

How can this be accomplished? By dissociation. The fundamental driver of the dissociation, in this way of looking at things, is the problem of attachment to the perpetrator. In order to survive, the child must attach to the person who is hurting her. There is no escape and no other option. In order to maintain the attachment systems up and running, they cannot be contaminated by the traumatic information coming in through the sense; that reality must be dissociated.

This is true whether the diagnosis is DID, PTSD, DDNOS or borderline personality disorder. Borderline personality is an inevitable consequence of the problem of attachment to the perpetrator and is a biologically normal human response to severe chronic childhood trauma.

In the new model, there is much, much less abreaction in therapy, if any. By this I mean, the kind of full-tilt abreaction where the person is back in the past, reliving the trauma as if it is happening all over again. Within the new model, abreaction is unnecessary and retraumatizing. What does occur is what I call intense recollection. The description of the trauma is still intense, vivid, and difficult, but it is grounded. Even in relatively pure cognitive therapy, as I do it, there is lots of intense feeling.

The first goal of therapy is to hold both sides of the ambivalent attachment in consciousness at the same time – to feel both the love and the hate. The love is always there, somewhere. I believe it is biologically impossible to extinguish your love for your parents, no matter how abusive they were.

Therapists can make a mistake by identifying with and supporting one side of the ambivalent attachment only. A not uncommon error is to validate and identify with only the anger, and push the love, attachment and approach underground. A pseudo-resolution of ambivalent attachment can occur when there is an artificial complete separation from the parents – this can be just a cover for unresolved ambivalence.

This error by therapists is a fertile ground for false memories.

In some situations, the parents are in fact so manipulative and abusive in the present day that complete separation is the only healthy option. That’s not what I’m talking about. I am thinking of people whose parents are semi-OK in the present and who are missing out on a limited positive relationship in the present because they have shut down the positive side of their attachment.

Once both sides of the ambivalent attachment are held in conscious awareness at the same time, and processed a bit, the next step is grief work. One must mourn the loss of the parent one never had. The task is to dissolve the unrealistically all-good or all-bad parent, deal with the actual disappointment and loss, and complete the task of separation and individuation. This is a job we are all working on. Those who were not severely physically, sexually, or emotionally abused as children have a much easier time because they did not have to dissociate in an extreme way to survive extreme conditions.

One reason I like this model is because it makes the extreme nature of the trauma clear, but emphasizes the fact that the core of therapy is a common human problem.

what you've stated is very significant. Yet, with the on set of horrific technologies, implants,etc... and folks who've been used as mind controlled slaves via trauma and technology. The Maze to "Freedom" seems insurmountable. Hopefully work will be a conduit for the many of us still fighting to survive and have a chance at living life.

"I believe it is biologically impossible to extinguish your love for your parents, no matter how abusive they were."

Not true, and a comment like this adds pressure to the survivors of parental abuse by denying their valid emotions. Many survivors have already been disbelieved, or had their feelings minimized, or been exhorted to "forgive." Through therapy I realized that neither of my parents (both of whom had personality disorders and perpetrated physical and emotional abuse) had ever loved me, and eventually I recognized the "love" I felt for them as a manufactured emotion. I grieved my loss, and eventually my feelings for them fell away. When each died, I felt nothing, although I poked around in my psyche for residual pain/love/loss, there was nothing there.