Warning Signs of an Abusive Personality 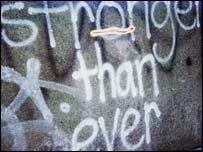 Something's just not right in your relationship, and you can't put your finger on it. So here's some help. If your mate is displaying a combination of these behaviors, then you may have a potential batterer on your hands.

1. A PUSH FOR QUICK INVOLVEMENT: Comes on very strong, claiming, "I've never felt loved like this by anyone." An abuser pressures the woman for an exclusive commitment almost immediately. Wants intimacy immediately.

2. JEALOUSY: excessively possessive; calls constantly or visits unexpectedly; prevents you from going to work because "you might meet someone"; checks the mileage on your car.

3. CONTROLLING: Interrogates you intensely (especially if you're late) about whom you talked to, and where you were; keeps all the money; insists you ask permission to go anywhere or do anything.

4. UNREALISTIC EXPECTATIONS: Expects you to be the perfect woman and meet his every need. Idealizes you to the point that you will never meet that reality.

5. ISOLATION: Tries to cut you off from family and friends; accuses people who are your supporters of "causing trouble." The abuser may deprive you of a phone or car or try to prevent you from holding a job. Tells you not to tell certain people about your relationship or him.

6. BLAMES OTHERS FOR PROBLEMS AND MISTAKES: The boss, you -- it's always someone else's fault if anything goes wrong.

7. MAKES EVERYONE ELSE RESPONSIBLE FOR HIS FEELINGS: The abuser says, "You make me angry" instead of, "I am angry" or, "You're hurting me by not doing what I tell you." Less obvious is the claim: "You make me happy."

8. HYPERSENSITIVITY: Is easily insulted, claiming that his feelings are hurt when he is really mad. He'll rant about the injustice of things that are just part of life.

9. CRUELTY TO ANIMALS AND TO CHILDREN: Kills or punishes animals brutally. Also may expect children to do things that are far beyond their ability (whips a 3-year-old for wetting a diaper) or may tease them until they cry. Sixty-five percent of abusers who beat their partner will also abuse children - emotionally, verbally or physically.

10. "PLAYFUL" USE OF FORCE DURING SEX: Enjoys throwing you down or holding you down against your will during sex; says he finds the idea of rape exciting. Kink or sexual things you are not comfortable with are pushed, begged for repeatedly.

12. RIGID SEX ROLES: Expects you to serve, obey and remain at home.

13. SUDDEN MOOD SWINGS: Switches from sweetly loving to explosively violent in a matter of minutes.

14. PAST BATTERING: Admits hitting women in the past, but says they made him do it or the situation brought it on.

15. THREATS OF VIOLENCE: Makes statements like, "I'll break your neck," or "I'll kill you," and then dismisses them with, "Everybody talks that way," or "I didn't really mean it." If he has come this far, it is time to get help, or get out!

Only a couple of these need to be present in a personality for them to be a potential abuser.  Your abuser  may be male or female.