Sticks & Stones Can Break My Bones... 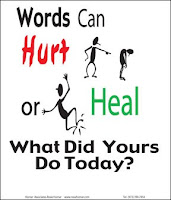 We all remember that age-old adage "Sticks and stones can break my bones, but words can never hurt me." Well, I beg to disagree.

As a writer I know the power of words. At the same time, as a facilitator of two support groups and consultant to women (and a few men) who lived in households and relationships where words were used as weapons, let me tell you, those words have held on to many of these people like heat-seeking missiles -- only they're still seeking out their targets even after many, many years.

Try some of these on for size:

"I should have had that abortion instead of having you."


"You are the worst mother on the face of the earth." (From a grandmother to her daughter, in front of her grandchild.)


"Why don't you quit being who you are and grow up?"


"With your grades you'll be lucky if the Army will take you."


"Why can't you ever do anything right?"


"You're not worth a plug nickel."


"You're the laziest child I've ever met."

In working with many of my clients, they all struggle with the same thing -- those powerful words that they have been psychologically "brainwashed" with have sent some of them on a self-limiting and/or self-destructive path. Even years after the person who originally uttered the emotionally abusive message is gone, the victim may still hear those exact words and phrases in their head, playing on as if the attacker is still in front of them, reciting the mantra every day.

Sticks and stones? Many feel that they would have rather been hit than attacked with the nebulous weaponry of brainwashing words. At least a broken arm or a black eye is evidence of wrong doing. But the destructive, stealth behavior of emotional brainwashing is so nebulous that it goes unnoticed until the damage is already done.

Want some specifics I see?


A 50 something-year-old woman who is terrified that her 91 year old mother thinks she's incapable of anything, and, as such -- has considered herself a failure all her life.


Two 50 something-year old twin men whose mother tells them she should have gone dancing instead the night she conceived them -- leaving them still afraid of her after all these years and blaming themselves for all their mother's problems.


A 30-something young gal -- Teri, whose sister Gail attacks her constantly and threatens that God will send her to hell because she is "unpure." (She doesn't worship the way Teri does.)


A 40 something gay guy named Jack, who feels that he'll never find love because for years his father told him God would punish Jack for being gay.


A 40 year old married woman who mourns the loss of never having a child after her first husband told her that "no one in their right mind would ever have a child with you," and he has since had a child with another woman. She, of course, is devastated.


Even teasing is powerful stuff. Saying things like, "Of course, I love you, honey. I don't care what anyone else says," has huge implications that everyone else thinks "honey" isn't up to her dear husband's standards.

Most of us can probably remember the childhood chant the fat kids often got -- "Fattie, fattie, two by four. Can't get through the kitchen door." How would you like to have been an overweight child and listened to that growing up? Words like those stick like glue to the very metal of our soul.

So what's my point? Be careful what you tell your children, your friends, and your family. Yes, even as grown ups we can still be affected by words -- especially if they have any resemblance to those we heard as kids.

Watch your teasing. Watch what you say when you punish your children for their mistakes. Watch your words as you compare your children's skills and weaknesses. "Why can't you be more like your brother? He really tries and you just pretend to work hard."

All are weapons that we may not even be aware of as incredibly destructive. Because if you believe the old adage -- "Sticks and stones -- you know the rest -- you may actually believe that what you say really can't hurt you.

But you'd be so terribly, terribly wrong.

Thank you for such a great article. Words are much more powerful than some realize, and we need to be a good example also, to teach kindness and raise self esteem in others to prevent bullying. At thethreadalliance.org we have some resources available to assist anyone who is making a wonderful difference in lives,as you are!