CYBERSTALKING IN THE 21st CENTURY - PART FOUR OF A SERIES 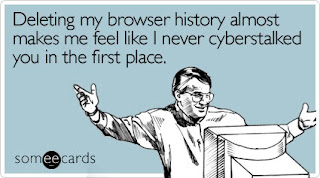 Lisa, a stalking victim who didn't want her real name used, said she started getting suspicious when her ex-boyfriend would show up wherever she went.

It didn't matter where: picking up clients or visiting the library, he would turn up.

He would phone her and ask where she picked up her two kids, and then fly into a rage when her answer didn't reflect the information he had.

And he was always right.

"He would appear in places he wouldn't otherwise know I was there," said Lisa.

Unbeknownst to her, Lisa's ex-boyfriend had attached a global positioning system device to her car.

"He is so smart with technology, he could put anything together," she said.

"He was a very nice guy, very nice -- all of the good things you look for," she said.

But their two-year relationship started to turn sour after he developed a drug addiction.

"It started affecting his brain and he would go days without sleeping," she said.

Repeated pleas to get him to stop went nowhere so Lisa was forced to issue an ultimatum.

"I warned him 'if I see you in that condition one more time, it's over,' " she said.

Knowing he was lying, Lisa tried to put an end to the relationship, causing him to fly into a rage.

"He broke things in his apartment, put holes in his walls," she said, adding he tried to contact her to arrange a meeting.

Lisa said he told her he would try to be calm.

"But as soon as he would hear the words break up, he would go crazy," she said.

After that meeting last February, the constant phone calls and e-mails began -- Lisa said he was begging just to hear her voice.

She said he would call in the middle of the night, unable to sleep, and ask her to talk about trivial things.

And then the threats started.

Despite the threats, Lisa didn't go directly to the police and her ex wouldn't relent. He would hound her constantly, from the first conversation about breaking up, to when he was arrested six months later. His phone calls became even more incessant, Lisa said, using cell phones to tie up the lines where she worked and having her cellular service cut off.

And during this period the strange appearances started, terrifying her even more.

"I realized that he was totally sick and it was damaging not just for me, but for him, because he had lost his mind," said Lisa, who eventually found the GPS device he was using and called police, but she said an arrest wasn't made.

Frightened about his actions, she went with her two kids to stay at her sister's, because she was worried he would break in to her house.

Compounded with the further threats against Lisa and her home, the authorities were called into the case. Not long after, he was arrested and charged with stalking.

Lisa hopes she won't have to deal with him again, but the ordeal has damaged her.

"There's a sense of self-protection on me now -- I don't even want to get into a relationship," said the American woman.

"What I feel right now is not good, because what I lost is a belief in love."

But most off all, she still can't shake the feeling of having her movements watched.

The thought a victim could be tracked anywhere they go in such a fashion terrifies an Alberta stalking victim, who was terrorized for nine months after her romantic entanglement with her eventual stalker came to an end.

Jane, who also didn't want her real name used for fear of stirring up past demons, said because of the nature of the crime, anything is possible with a persistent stalker.

"That's terrifying -- I couldn't imagine that," Jane said of the possibility of being tracked with GPS.

"I'd be freaking out and if someone did that to me and I found out, the first thing I would try to do is get a new car."

Jane's stalker would skulk around her house and send her letters threatening to send lurid photos to her relatives.

He would try to be sweet, Jane said, but his mood would turn on a dime when she rebuffed his attempts to regain her affection.

"He would latch on to my car when I tried to drive away and he would show up at my door constantly causing trouble," she said.

Jane said he sent her letters to the front desk of her office, leave nasty notes in her mailbox, ring the doorbell and run away.

Jane said he supplemented his letters with constant phone calls, both to her home and her workplace, totalling nearly 50 every day.

"It was extremely frightening because you never knew what he was capable of," she said.

Eventually, Jane was able to get a restraining order against her stalker, followed by his arrest, charges and a jail sentence.

"I'm just trying to live my life, to get it out of my mind," she said.

"But if I see somebody that even remotely looks like him, my heart just stops."