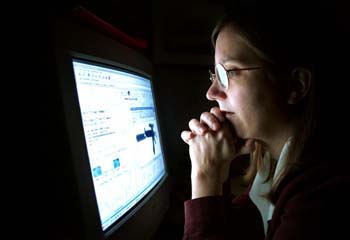 Calgary, Alberta (CANADA) -- It took her almost three years, but Jane was able to get justice against her stalker.

After months of endless phone calls, letters and being followed, Jane -- not her real name -- breathed a sigh of relief in 2002 when her stalker was sentenced to jail.

"I was so grateful -- I was so relieved when it was over," said Jane. "I had almost given up."

A restraining order didn't work -- her stalker kept coming. But he was eventually arrested, tried and convicted, and Jane has had more than two trouble-free years.

There have been no phone calls, no notes, not a peep.

But Jane is still careful.

Her phone number is unlisted, she has a new job, and she hopes to move to another part of town, just to be safe.

She wanted neither her name nor her stalker's name printed.

But she wants to see other women in similar situations follow her example of never giving up, and going to great lengths to protect themselves.

"They're dangerous even if they don't touch you, because you don't know what they're capable of doing," she said.

Information risk specialist Sharon Polsky says the key to staying safe from a stalker is protecting your personal information.

"Someone who is a stalker, they are determined and they usually have a target in mind," says Polsky, owner of Project Scopes Solution Group.

A target can prevent a stalker from learning more about her -- victims are overwhelmingly female -- by being protective about what information they give out in their day-to-day lives.

"Don't give real information on websites and don't give out your home number on websites, unless you're dealing with the government and you're required to," she said

Polsky also advises women to make sure their addresses aren't listed in the phone book, or to have a completely unlisted number.

"Also, get a shredder so your utility bill doesn't accidentally end up blowing down the alley in the breeze," she said.

It's also advised if a victim moves to escape a stalker, that she set up an alternate mailing address, such as a post office box.

The Canadian Resource Centre for Victims of Crime says the post office box should be a victim's primary address for licences, car registration, credit cards, bills, schools, voter records, and all medical records

And, as a general rule, people should not give out their Social Insurance Number to anyone other than banks and employers, because a SIN can be used to track someone.

In addition to protecting information given out on-line, Polsky said people need to protect their home and work computers by changing passwords and making sure they've been turned off before stepping away from them.

But Polsky said a persistent stalker will use any means to get information. "It's not the technology, it's the people," she said.

"Stalkers operate on base instincts -- it's very easy to get information from people just by asking."

Tracy Bahm, director of the Stalking Resource Centre at the National Centre for Victims of Crime, in Washington, D.C., said it's frightening what someone can find out with something as simple as an online background check.

"You're info gets passed around and put in more and more databases, so you need to protect it," she said.

Victims also need to keep a record of everything, Bahm said, no matter how minute the contact.

"It's multiple acts that make up stalking," she said. "A lot of it is keeping a log keeping record of how many phone calls or e-mails came in on a given day."

But even if victims are even able to protect themselves or gather enough evidence to take to the police, stalking still leaves a mark.

"It's that invasion into every part of your life that I think is really hard for victims -- unless that person dies, it never goes away," Bahm said.

Bahm said people are aware technology is being misused but as it gets better, it becomes harder and harder to detect

That means victims and police have some distance to make up in the race to thwart the shadowy techno-stalker, with all eyes on his victim.

If you or someone you know is being tormented , you can:

* Get a peace bond under section 810 of the Criminal Code of Canada. They can have conditions of no contact, or order a person to stay a certain distance away from you

* Keep as much information as possible private , and change your mailing address to a post office box

* Keep the outside of your house well-lit, install an alarm, change the locks and keep doors and windows locked, even when you are home

* Change your phone number, using *67 to block your number or *57 to trace harassing calls

* A cellphone is recommended in case of emergency

* Keep emergency numbers next to the phone

* Seek out the help of victim services in your community

* Have unnecessary information about you removed from your company's website

* Be well aware of your surroundings when you are out

* If you are being followed, drive directly to a police, gas or fire station, remain inside the vehicle and honk the horn until someone comes to your aid

* If a friend is being stalked, express concern about it to the victim and encourage them to turn to the police for help

Some things a stalker may do:

* Damage the home, car or other property

* Monitor phone calls or computer use

* Make threats or commit other actions

While not all stalkers are the same, most of them share some common traits:

While a stalker can pose a threat to his target, there are a number of warning signs the risk regarding the stalker is increasing:

* Closer geographical proximity of the stalking