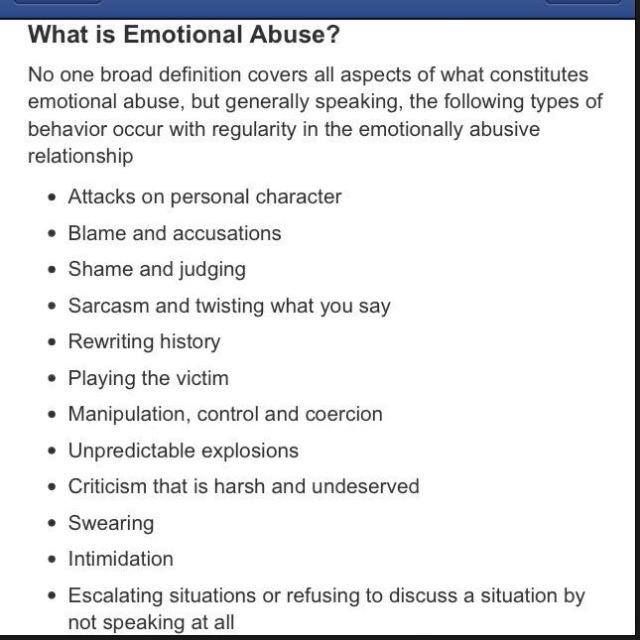 
- You understand their feelings, but they never attempt to understand yours;

- They dismiss your difficulties or issues as unimportant or an overreaction;

- They do not listen to you;

- They always put their needs before yours;

- They expect you to perform tasks that you find unpleasant or humiliating;

- You "walk on eggshells" in an effort not to upset them;

- They ignore logic and prefer amateur theatrics in order to remain the centre of attention;

- Instead manipulate you into feeling guilty for things that have nothing to do with you;

- They attempt to destroy any outside support you receive by belittling the people/ service/ practice in an attempt to retain exclusive control over your emotions;

- They never take responsibility for hurting others;

- They blame everyone and everything else for any unfortunate events in their lives;

- They perceive themselves as martyrs or victims and constantly expect preferential treatment.

- refusing to acknowledge a person's presence, value or worth; communicating to a person that she or he is useless or inferior; devaluing her/his thoughts and feelings. Example: repeatedly treating a child differently from siblings in a way that suggests resentment, rejection or dislike for the child.

- insulting, ridiculing, name calling, imitating and infantilizing; behaviour which diminishes the identity, dignity and self-worth of the person. Examples: yelling, swearing, publicly humiliating or labelling a person as stupid; mimicking a person's disability; treating a senior as if she or he cannot make decisions.

- inducing terror or extreme fear in a person; coercing by intimidation; placing or threatening to place a person in an unfit or dangerous environment. Examples: forcing a child to watch violent acts toward other family members or pets; threatening to leave, physically hurt or kill a person, pets or people she / he cares about; threatening to destroy a person's possessions; threatening to have a person deported or put in an institution; stalking.

- physical confinement; restricting normal contact with others; limiting freedom within a person's own environment. Examples: excluding a senior from participating in decisions about her or his own life; locking a child in a closet or room alone; refusing a female partner or senior access to her or his own money and financial affairs; withholding contact with grandchildren; depriving a person of mobility aids or transportation.

- failing to provide care in a sensitive and responsive manner; being detached and uninvolved; interacting only when necessary; ignoring a person's mental health needs. Examples: ignoring a child's attempt to interact; failing to show affection, caring and / or love for a child; treating a senior who lives in an institution as though she / he is an object or "a job to be done."

- Emotional abuse accompanies other forms of abuse, but also may occur on its own;

- No abuse - neglect, physical, sexual or financial - can occur without psychological consequences. Therefore all abuse contains elements of emotional abuse;

- Emotional abuse follows a pattern; it is repeated and sustained. If left unchecked, abuse does not get better over time. It only gets worse;

- Like other forms of violence in relationships, those who hold the least power and resources in society, for example, women and children, are most often emotionally abused;

- Emotional abuse can severely damage a person's sense of self-worth and perception;

- Emotional abuse can also affect a child's social development and may result in an impaired ability to perceive, feel, understand and express emotions.

HOW WIDESPREAD IS EMOTIONAL ABUSE?

Only a few studies provide insight about the prevalence of emotional abuse. Emotional abuse is difficult to research because:

- Its effects have only recently been recognized;

- There are no consistent definitions and it is hard to define;

- It is difficult to detect, assess and substantiate; and

Emotional abuse of children can result in serious emotional and/or behavioural problems, including depression, lack of attachment or emotional bond to a parent or guardian, low cognitive ability and educational achievement, and poor social skills.

One study which looked at emotionally abused children in infancy and then again during their preschool years consistently found them to be angry, uncooperative and unattached to their primary caregiver. The children also lacked creativity, persistence and enthusiasm.

Children who experience rejection are more likely than accepted children to exhibit hostility, aggressive or passive-aggressive behaviour, to be extremely dependent, to have negative opinions of themselves and their abilities, to be emotionally unstable or unresponsive, and to have a negative perception of the world around them.

Parental verbal aggression (e.g., yelling, insulting) or symbolic aggression (e.g., slamming a door, giving the silent treatment) toward children can have serious consequences. Children who experience these forms of abuse demonstrate higher rates of physical aggressiveness, delinquency and interpersonal problems than other children. Children whose parents are additionally physically abusive are even more likely to experience such difficulties.

Children who see or hear their mothers being abused are victims of emotional abuse.

Growing up in such an environment is terrifying and severely affects a child's psychological and social development. Male children may learn to model violent behaviour while female children may learn that being abused is a normal part of relationships. This contributes to the intergenerational cycle of violence.

Many women in physically abusive relationships feel that the emotional abuse is more severely debilitating than the physical abuse in the relationship.

Repeated verbal abuse such as blaming, ridiculing, insulting, swearing, yelling and humiliation has long-term negative effects on a woman's self-esteem and contributes to feelings of uselessness, worthlessness and self-blame.

Threatening to kill or physically harm a female partner, her children, other family members or pets establishes dominance and coercive power on the part of the abuser. The female partner feels extreme terror, vulnerability and powerlessness within the relationship. This type of emotional abuse can make an abused woman feel helpless and isolated.

Jealousy, possessiveness and interrogation about whereabouts and activities are controlling behaviours which can severely restrict a female partner's independence and freedom. Social and financial isolation may leave her dependent upon the abuser for social contact money and the necessities of life.

Emotional abuse can have serious physical and psychological consequences for women, including severe depression, anxiety, persistent headaches, back and limb problems, and stomach problems.

Women who are psychologically abused but not physically abused are five times more likely to misuse alcohol than women who have not experienced abuse.

Senior abuse is still a new issue and there is still little research in this field on emotional abuse.

We do know that senior emotional abuse and neglect can be personal or systemic and that it occurs in a variety of relationships and settings, including abuse by:

- adult children or other relatives;

- unrelated, formal or informal caregivers; or

- someone in a position of trust.

Seniors who are emotionally abused may experience feelings of extreme inadequacy, guilt, low self-esteem, symptoms of depression, fear of failure, powerlessness or hopelessness. These signs may be easily confused with loss of mental capability so that a senior may be labelled as "senile" or "incapable" when in fact she or he may be being emotionally abused.

Abusers may often outwardly display anger and resentment toward the senior in the company of others. They may also display a complete lack of respect or concern for the senior by repeatedly interrupting or publicly humiliating her or him. Not taking into account a senior's wishes concerning decisions about her or his own life is an outward sign of abuse.

Emotional abuse may be difficult to detect. However, personal awareness and understanding of the issue is key to recognizing it. The following indicators may assist in detecting emotional abuse.

- failure to thrive in infancy;

- physical complaints with no medical basis;

- inappropriate behaviour for age or development;

- other forms of abuse present or suspected;

- feelings of shame and guilt;

- delay or refusal of medical treatment;

- discomfort or nervousness around caregiver or relative;

Legal intervention in cases of child emotional abuse and neglect is governed by provincial and territorial child protection legislation.

These behaviours must cause a person to fear for her or his safety or the safety of someone she or he knows.

Other forms of emotional abuse such as insulting, isolating, infantilizing, humiliating, and ignoring, although serious, are not criminal behaviours and cannot be prosecuted.

WHAT CAN YOU DO?

If you are being abused, remember:

-You are not alone;

- No one ever deserves to be abused; and

if you suspect/know someone is being abused

- Let the person know about available support services; and

- Report suspected or known child abuse or neglect to a child welfare agency or the police.

if you are a service provider:

Work with other organizations to:

- Address the needs of those who have been or are being emotionally abused; and

- Keep informed of resources and materials relating to intervention and prevention of abuse.


THE PSYCHOLOGY OF ABUSIVE MEN

72% of American suicides are committed by white males; black men prefer homicide. (This suggests white men blame themselves and black men blame others: white neurotics, black psychotics.) Prisons overflow with men, and juvenile detention centers teem with boys; remedial readers are, in 90% of cases, male, as are those diagnosed with Attention Deficit Disorder, substance abusers, and the violent. Rates of injury are three times as high for males. The lives of men are eroded by frustration inhibition perversion.

A white collar drug addict remarked: My work is so boring that it's really hard to do it if you're not hung-over in some way. My friend tried to not do drugs for a while and he was, like, "This is a nightmare! I have to sleep eight hours a day! I'm tired all the time! I wake up and it takes me three hours to get up, and then I'm tired in the afternoon."

Men are dying of loneliness, and no one knows.

- from The Eclipse: A Memoir of Suicide by Antonella Gambotto

Bipolar Disorder: Signs, Symptoms and Treatment The Super Bowl & Domestic Violence "YOU LOOK A LOT LIKE ME" - Documentary on Domestic... Blog Reader Appreciation Day The Misogynist Common "games" between those with Borderline Perso... Battered Woman Syndrome Reactive Attachment Disorder (RAD) The Roots of Violence Infidelity = A Form of Abuse