What is Projection, Exactly? 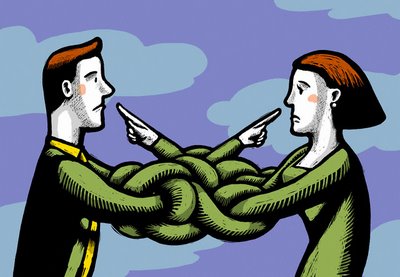 Written by Kathi Stringer
Projection is to blame another person for one’s own actions.
Primitive and Infantile Defense


Projection – Action
You made me do it! Ever hear those words from an angry and frustrated child? In essence, the child is projecting the responsibility of his/her actions onto someone else. This child is anxious to rid themselves of the garbage. Projection is to ‘blame’ another. And, the words, ‘you made me do it,’ slip out ever so easily.

My little 5-year-old girl was listening to her grandparents in a tiff. Grandma said, “You made me [do this]!” Grandpa said, “No, you made me [make you do this]!” Finally, K, an intuitive child, shouted in response, “Stop projecting!” She caught them both by surprise. A small child had recognized projection in action.

Example #1: (Action)
Jim is holding an expensive camera. Jane is fumbling with the keys to the door. In the meantime, Jim drops and breaks the camera. Jim screams at Jane, “See what you made me do! I broke it because you didn’t open the door!” Jim blamed Jane for dropping the camera. Jim could have prevented the camera from dropping if he had employed foresight and safety measures..i.e putting the camera band around his neck.

Projection – Emotional
You make me [feel] so mad! This is a bit more complicated because a degree of transference is involved. Easy speak – Transference = transferring memories from the past, placed onto a different person.

The derivatives of transference in this case transmutes into projection. Meaning, if an individual gets angry beyond the objective meaning of the statement, (reads more into it than intended) then a level of projection is at work. In other words, a person that reminds another individual of their hated father (transference at work – transference is ALWAYS a distortion), and OVERREACTS to a statement from that person based on that memory (triggered), then, that excessive anger would be projection.

Example #2: (Emotion)
Jane said, “Jim, just make a choice. We don’t have all day.” Jim screams back, “Why don’t you just shut your big mouth?” and stormed off. On examination, Jim grew up with an over critical, and impatient mother. When Jane made her remark, Jim regressed into the child that hated his mother. Jim did not see Jane standing there at the moment. He saw his hated mother, in the transference. Now that Jim has a bigger body and is more confident to protect himself, he reacted in defense of the critical mother. It happened in a snap of the fingers. In this case, Jim was projecting out of his transference. Jim had distorted Jane into his hated mother. Remember, transference is always a distortion.

Caution:
While pointing out that action projection can be funny at times, (Remark: You made me drop the hula-hoop when you spoke! – Response: ha ha projection!), it is dangerous to point out the err of a person’s behavior during an emotional projection, UNLESS YOU ARE A PROFESSIONAL. Since the person is caught up in the transference, empowered by the transference, and enraged by the transference, it would be wise to let the transference diminish before discussing the event. To address the distortion in the heat of the moment, can be perceived as minimizing the original trauma. This will lead to an unconscious perception of the invalidated child/victim (How dare you!? It did happen!). Wait until the person cools down and gets a grip back on reality and the transference is held in abeyance.

For Professionals:
The superlative therapeutic window to target projection, from the transference, would be in the height of the moment. However, a strong therapeutic alliance and rapport MUST BE established first. Trust is paramount. At this time, the client’s internal closed core objects are ‘hot’ and can be redefined through a new experience. See more on ‘projective identification.’

· EMOTIONAL – You make me feel this way!

Question:
Is transference and projection the same?

Answer:
No. Some claim they are the same because psych can become convoluted (duh) to the point meanings are no longer clear to the novice. However, on exact examination, projection is ‘caused’ by the transference. Transference is ‘activated in the person, and projection is the release of that transference out of the person. One treater said, “I hope you know, all this anger you are projecting on to me is not my anger, it is YOUR anger.” The client coolly said, “Can you think of anything better to do with it? (Gabbard)

Homework
Observe the number of times you can spot projection. Then, in cases of emotional projection, try to objectively determine the extent of the justified response vs. the transference reaction. Is if off just a little? Is it half-and-half? Is it way out there? This exercise can be a powerful indicator for self-awareness, an indicator to seek treatment for self or other.

Effective Inpatient Treatment And the Amelioration of the Therapeutic Alliance For Resistive Individuals with BPD – K. Stringer

I'm wondering if people who project can change that behavior or if they will always be like that and never ever take responsibility for their own behavior and words?

If they are a narcissist or psychopath, no never. Sorry

Knowing a P or N cannot be helped is impowering. Recovering from their abuse is hard enough and it would be almost impossible if felt they could change. Its that hope that keeps you in the relationship. Once you know and believe they are inhuman, all your focus is on your healing, not on your helping them anymore. No contact ever no matter what.

Overcoming Triangulation in Love Relationships How Psychopaths View Their World Have They Really Changed? How They Do It: Sociopathic Deception and Manipula... Anyone You Want Me to Be Narcissists: Troubled Cases of Arrested Child Deve... Disabled Women & Abuse Entitlement When The Abuser is a Police Officer SMEAR CAMPAIGNS OF THE DISORDERED & PATHOLOGICAL