Passive-aggressive communication is a means of expressing anger indirectly.

Examples of passive-aggressive behaviors are listed below.

Examples of Common Fears and Issues for Passive-Aggressive People

Dealing with passive-aggressive people can be especially difficult, particularly when you are relying on them to do something properly and on time, without difficulty and complications.

In the workplace, passive-aggressive people should be dealt with administratively, since trying to work around, adjust to, and change their behavior is impossible. They will sorely resent the supervision; however, they were likely already displeased and resentful of it anyhow.


Dealing or working with a passive-aggressive person can feel like a gigantic game of Whack-a-Mole.

Once you think you’ve addressed the first excuse, lie, issue or ambiguity, they’re off and running presenting you with a third, second and fourth. It’s as if they’re playing a mental game designed to exhaust you into giving up asking anything reasonable of them. Insisting and pressuring them into fulfilling their obligations only makes things worse.

When in situations where you are forced to work with them, do not assume responsibility for their work or lack thereof. Do not let the maddening inefficiency and game-playing get to you. Concentrate on your own responsibilities, and minimize working on joint projects with them as much as possible. Above all, don’t take the bait that sends you begging them to cooperate. They will only resent you for it and get you back later.

And definitely, without delay, add passive-aggressive people to your list of toxic people to avoid wherever possible.

FROM THIS GREAT SITE!

I do not love; I do not love anybody except myself. That is a rather shocking thing to admit. I have none of the selfless love of my mother. I have none of the plodding, practical love. . .   I am, to be blunt and concise, in love only with myself, my puny being with its small inadequate breasts and meager, thin talents. I am capable of affection for those who reflect my own world. – Sylvia Plath


There is a special place in hell for narcissistic mothers. Ms. Plath herself indulged in the ultimate narcissistic act when she committed suicide by sticking her head in the oven while her two young children were asleep in the same apartment. How thoughtful of her to have sealed off their rooms with towels so that the fumes wouldn’t consume them too. She needed someone to live on to remember her and care that she was gone.


They don’t see their role as a mother as life’s biggest gift. It’s a burden they didn’t expect. They thought they were creating little “mini-me’s.” They didn’t take into account the fact that somewhere around age 2, these spiteful, ungrateful (in their minds) little creatures start to develop their own individual personalities and wills of their own. For the rest of us, that’s the best part of being a mom — watching our children grow into increasingly independent, confident, free-thinking individuals. For the narcissistic mother, each step away from her is an absolute act of betrayal.


Children have emotions that they express quite freely. This annoying practice is squashed as early as possible since narcissists cannot handle emotions. “What is wrong with you?” and “You’re so oversensitive” and “You’re overreacting” are common phrases uttered to children of narcissists.


These mothers end up resenting all the work that goes into raising a child, having no use for them unless they are achieving, doing something or otherwise reflecting their false image onto them. Children are a nuisance to them, taking precious time away from their own agendas. They don’t like to have to shop for clothes for their children, prepare meals for them, do their laundry, pay for daycare, enroll them in activities, drive them to friends’ houses, throw birthday parties, pay for their college educations or protect them from abuse.

They will smother and overprotect their children under the guise that they are taking care of them. They will fail to provide age-appropriate information on such things as menstruation, personal grooming (make-up, hairstyles, shaving, etc.), budgeting money and dating. This all serves to keep her children under her control as long as possible. If they are ill-informed and overprotected, they will not feel confident to grow or move further away from her.

Of course, they train their children to believe that they are the ideal mother. Any evidence to the contrary is to be kept secret at all costs. They will behave much differently toward their children in public than they do at home. They will vehemently deny any wrongdoing on their part and most likely blame their children, completely rewriting history.

They are jealous of their children’s successes, even though they brag to others about them (‘see how great MY kids turned out’). They will make snide comments if they think one of their adult children has a better marriage, house, job, etc. than they do. They are thrilled when they perceive that one of their adult children has failed in some way (although they never tell others about these “failures”; it reflects poorly on them). They are more than happy to assist when necessary because that makes them look good, plus, there is an added bonus of having favors to collect on. Asking a narcissistic mother for a favor feels like selling your soul to the devil. It’s emotional extortion.


These mothers steal their kids’ childhoods, identities and future healthy relationships. They will keep on taking and sucking the life out of their children for as long as they live, if their children allow it. It is incredibly difficult and painful to acknowledge that your mother never loved you without blaming yourself — she raised you to blame yourself for everything. But it is necessary to put the blame where it rightfully belongs in order to insure that this insidious disorder isn’t perpetuated generation after generation. 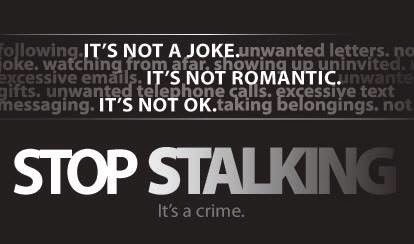 S. Con.Res 10, sponsored by Senators Mike DeWine (R-OH) and Joseph Biden (D-DE), will help bring national focus to a crime that has far-reaching impact on the daily lives of victims.

"Stalking is a tremendous problem, and it is one that we need to do more to address," said Senator DeWine. "A National Stalking Awareness Month will help to educate and increase awareness about stalking. We can--and we should--do more to ensure that stalkers are brought to justice and that their victims are not forced to live in fear."

More than one million women and nearly 400,000 men are stalked each year in the United States. In the majority of cases, victims are stalked by someone they know. Many victims live in constant fear and are forced to relocate to protect themselves. More than two-thirds of women who were murdered by an intimate partner had been stalked by the person who killed them.

"We are very grateful for the efforts of Senator DeWine and Senator Biden to help us bring this issue to the attention of the public," said Mary Lou Leary, executive director of the Center for Victims of Crime. The adoption of this resolution by the Senate will spur communities nationwide to improve their response to this devastating crime."

The National Center for Victims of Crime is dedicated to forging a national commitment to help victims of crime rebuild their lives. The National Center's toll-free Helpline, 1-800-FYI-CALL, offers supportive counseling, practical information about crime and victimization, and referrals to local community resources, as well as skilled advocacy in the criminal justice and social service systems.

SIGN THE PETITION!  http://www.ipetitions.com/petition/a-call-to-action-for-stalking-reform
.
shared by Barbara at 12:00 AM 0 comments

The Differences Between A Sociopath And A Narcissi... Why PTSD Needs Treatment and Does Not 'Get Better'... Psychologist Explains the Psyche of Psychopaths How Con Artists Choose Their Victims The Power of the Original Trauma Bond Reactive Abuse - What Is It? Goodbye, Martyr Man Online Dating Is A Hunting Ground For Narcissists ... Domestic violence victims, stuck at home, are at r... Brainwashing Agitates Victims Into Submission


FAIR USE NOTICE: This site contains copyrighted material the use of which has not always been specifically authorized by the copyright owner. This material is made available in an effort to advance understanding of environmental, political, human rights, economic, democracy, scientific, and social justice issues, etc. We believe this constitutes a â€˜fair useâ€™ of any such copyrighted material as provided for in section 107 of the U.S. Copyright Law. In accordance with Title 17 U.S.C. Â§107, the material in this message is distributed without profit to those who have expressed a prior interest in receiving the included information for research and educational purposes. If you wish to use copyrighted material from this site for purposes of your own that go beyond 'fair use', you must obtain permission from the copyright owner.